Going to the ‘Hert’ of the matter! 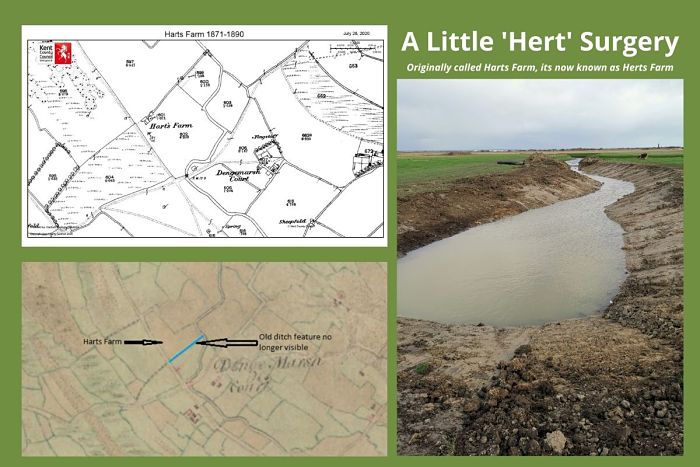 The Fifth Continent Project has completed work at Herts Farm, to the back of Lydd and right on the edge of Dungeness SSSI. The landowner Stephen Beard, contacted us, wanting to know whether we might be interested to re-create a ditch which used to exist on his part of the Dengemarsh – we were intrigued and went to take a look.
Sourcing old maps of the area with help from Andrew Mayfield the archaeologist on our team, it turned out that the map from 1799 showed the ditch as a clear feature, but the next map we could find was from 1871 and the ditch had miraculously disappeared. Whether this was just poor mapping (it does get windy down there and after a few pints…) or the ditch naturally silted-up as often happens we will likely never know.
Stephen is keen on making his part of the marsh better for wildlife – he has already planted wildflowers and with our help will plant 160 trees and shrubs. So we set to work to add even more value by re-instating the lost ditch, creating a wide bay-end and installing a controlled culvert to hold back water in the summer and stop Common Reed from invading, as well as de-silting and re-profiling his other ditch. The work looks great and in the next few years will be full of aquatic species, in fact it looks so good that the landowner over the road also wants to work with us to create wet scrapes in his fields to benefit Redshank and other waders.