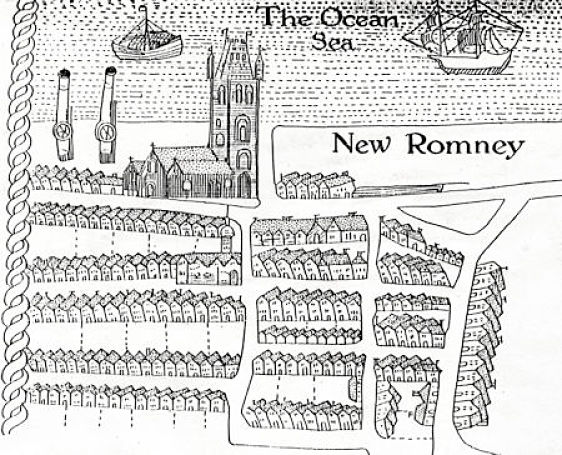 Over the coming months we’re creating a new heritage trail for the town of New Romney. As well as introducing the fascinating history of the town itself, the new trail will introduce all sorts of interesting facts about the whole Romney Marsh area. We’ll be sharing a few of these with you over the coming months. New Romney was once one of the most important towns in England. It was one of the first five Cinque Ports – from the French word for five, but pronounced “sink”. These ports provided men and ships for the service of the monarch when required. In return, they were granted many freedoms and privileges. The Cinque Ports were allowed to hold their own courts and were exempt from national taxes; instead they were allowed to raise their own which gave New Romney and the other ports great independence and wealth. This impacted the socioeconomics and culture of the whole Romney Marsh area.

The town grew along a narrow shingle spit; a finger of land with the sea on three sides which provided extra quayside space but which also made it extremely vulnerable in storms and bad weather (more on that to come!…).

A port had also existed at the inland settlement now known as ‘Old’ Romney, but its access to the sea became increasingly difficult as the river began to silt up and larger boats could no longer be brought to land there.