On a bright but bitterly cold day in February I was out at the RSPB reserve on the Dungeness peninsula. Arriving a little after 8am I was the first car in the car park, a good couple of hours before the visitor centre would open, the only sounds being the birds stirring and jostling for position on the many nearby pools and islands. I had that wonderful sense of quiet appreciation intermingled with a mischievous glee at being somewhere that others weren’t.

Just as I was beginning to feel the niggling need to check I was in the right place (of course I was I’d been there many times and arranged everything the day before but still…) the morning birdsong was interrupted with the distant sound of a tiny little engine belonging to a speck in the distance, at first difficult to make out what it was but definitely headed my way.

As it came closer I could see it was the little warden’s buggy with it’s special balloon tyres for leaving as little impression on the ground as possible (vital on a site comprised entirely of delicate shingle habitats with rare plants and animals unlike anywhere else in the world). But before it got to me it speared off at a right angle towards the worksite. As it turned I could see that the buggy was loaded up with pallets, an indication of the task ahead…

I caught up with it just as the pallets were being unloaded. Craig Edwards the Assistant Site Manager introduced me to the two interns who would be leading the task for the day and we began laying the pallets out to form a pathway to the area of bare shingle specially chosen for this most unusual of tasks. The pallets were Craig’s brainwave, laid out in this way meant that we’d be able to walk out onto the shingle without out footsteps damaging the delicate lichens, this is the sort of insight that comes with working in this environment day in and day out. 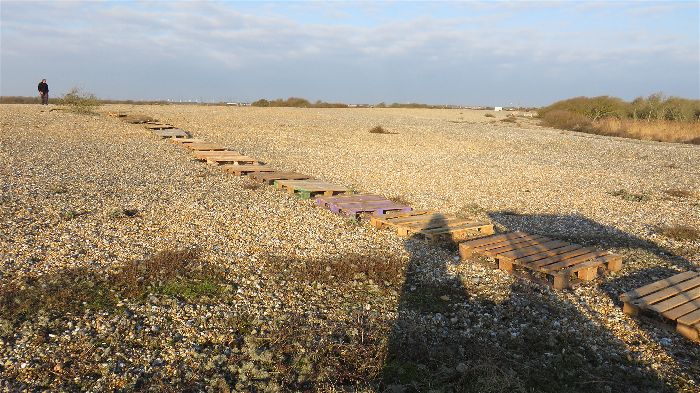 The plan for the day was to carry cut Willow branches or “brash”, the word of the day, from where it had been laid (during recent works to clear out pools to benefit the other plants and animals living there) across the pallets and onto an area of shingle that met just the right requirements and there pile it up into 6 distinct blocks at different heights. So why on earth would anyone want to do that? and why was I there?

It was all part of a project called Shingle on the Cusp. This project is about trying to understand and protect the vulnerable shingle habitats on the Dungeness peninsula. Some of the plants and animals that live there are found nowhere else in the world! Like the Dungeness Pigmy footman moth.

There are several ways in which I’m hoping we can do this, one is by controlling invasive species like Red Valerian to allow other delicate plants the space to thrive, one is by educating local people about the uniqueness and fragility of this landscape and one is about trying to find out what can actually be done to restore this landscape once its been damaged…that’s what this task was about.

A few years ago, an ecologist named Dr Brian Banks was working on the shingle and noticed that some branches had been accidentally left on top of an area of bare shingle, initially he was cross at the untidiness but then on closer inspection he noticed that some plants had started to grow out of the shingle beneath the branches, no plants at all had grown in the surrounding areas but here below the branches were a few tiny plants, so he followed the progress of these plants over the next few years and sure enough as the branches continued to rot down this little green oasis got denser and thicker with new species appearing. Being a man of science this led him to some interesting questions; was this a one off? How much, or how little, brash would need to be piled for this to happen? What he needed was an experiment.

Fast forward to now and through the Fifth Continent Landscape Partnership Scheme and Heritage Lottery Funding I have been able to take this forward and test those very questions. We would lay out brash on bare, disturbed shingle somewhere near to a track where we could access it without damaging the surrounding area. We would use three different depths, 2ft, 4ft and 6ft each in a plot of 4 metres by 4 metres. We’d need to replicate the plots to control for errors and then monitor the progress over many years to see what happens. Perhaps then we would be able to say with certainty; “this is what works best”.

So there I was, cold, staring at a pile of brash with a daunting task ahead, what was needed were some reinforcements.

Then the volunteers arrived.

This hardy bunch of seasoned Dungeness workers barely exchanged a word or questioned why on earth they were there before they began marching towards the pile of brash, grabbing whole willow trees, lifting them over their heads and marching in file along the pallets to deposit them onto the chosen spot. The interns ran back and forth under my vague and often conflicting instruction (creating scientific brash piles was a new undertaking for me) to place the deposited branches into their final resting places. 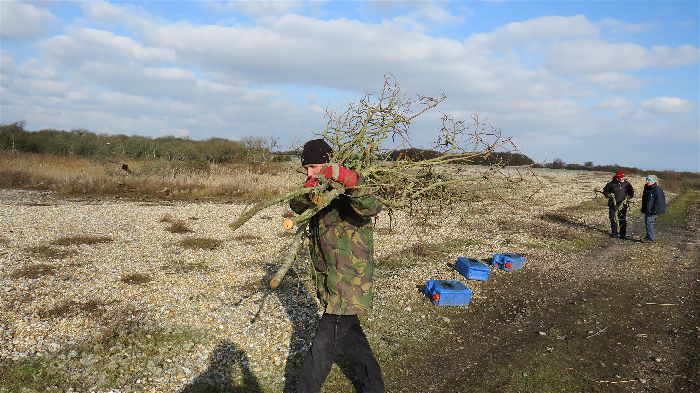 The work must have been quite a spectacle, we even had a visit from the General manager Gareth Brookfield who came to dutifully check on what we were up to and not being one to stand on ceremony, he promptly got stuck in carrying branches backwards and forwards with the rest of us.

I kept dashing to my camera to try and keep track of progress but often in vain as these volunteers worked at a tremendous speed!

I had been thinking beforehand about how many piles we might construct in a day and at the start of the day I thought 6 might have been overly ambitious but there we were one hour in and 4 piles done already! 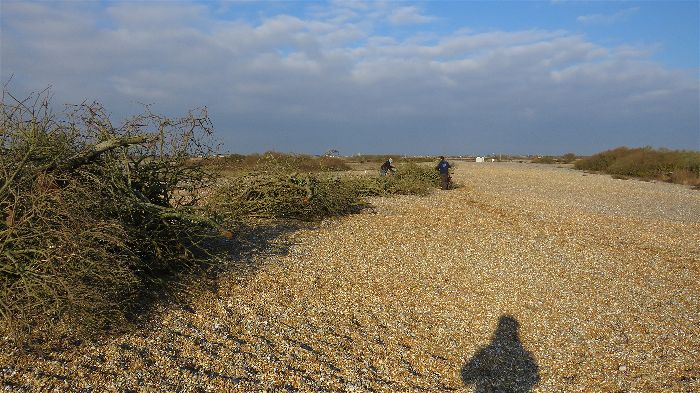 I joked with Gareth that I should’ve asked for more. He stayed completely straight, looked me in the eye and said “Well why don’t we?”

He then formulated a plan in an instant… “We’ll phone Jo and Abbi, check it’s OK, build three more piles and we’ll still be done in time for lunch”.

That was music to my ears, but I should explain; when you’re planning on a never before tried experiment taking an army of people over an internationally important and fragile habitat you can’t just trample all over it and pile up branches wherever you’d like. There are systems and processes to make sure nothing is going to damage this precious resource. I’d been working over the previous 6 months or more, under the guidance of Dr Brian Banks and his initial research and negotiating a plan with Gareth at the RSPB all under the watchful eye of the local advisors from Natural England (the governing body in charge of sites of Special Scientific Interest and the enforcement agency if anything goes wrong) but Jo Dear and Abbi Bamping were fantastic in these negotiations, not only did they help in making sure it would be done in the best way, they even helped put me in touch with other organisations such as the Ministry Of Defence to potentially carry out experiments on their land too.

So on the day we were working to their specific instructions for 6 plots but after a phone call to Abbi by Craig they agreed that if we had the man(and woman)power we could position three further plots to make the data even more scientifically robust! All that needed to be done now was break the news to the volunteers… best wait til after tea-break. 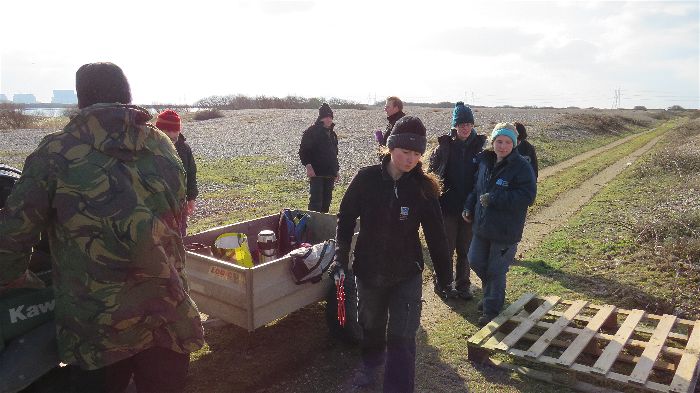 I cracked out the cookies I’d bought (Lidl, with a gooey hazelnut centre…wow!) and the interns made the tea. I bravely let the interns break the news that we’d be building more piles (how else can they learn to deal with conflict in the workplace). To their credit the volunteers barely said a word in protest (except you Mark of course), it must’ve been the cookies.

I then learned that it was one volunteers first ever day! Sarah had probably not known what she’d let herself in for but I was at pains to say this wasn’t the norm, I’d hate to think she didn’t come back as a result of my weird task, but she worked just as hard as all the others so I’m sure she’s a regular part of the team by now. After all it’s not every day you get to take part in a scientific trial!

Come back and find out the results in ten years’ time!

Warmest thanks to everyone involved, a successfully laid out trial and a great time had! Cheers! 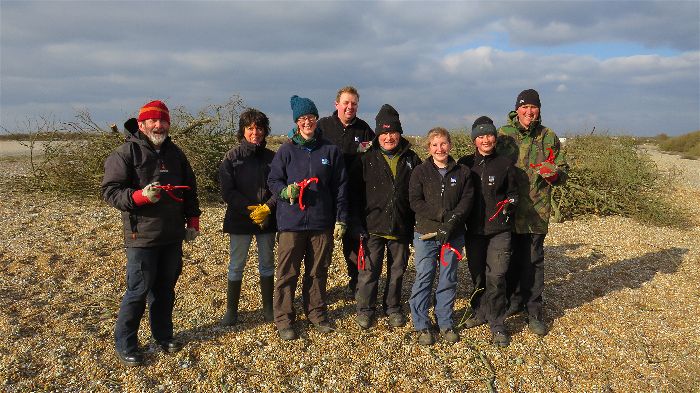